We are proud to share our joy that we are the first homegrown Solar rooftop integrator company in coastal Karnataka to receive ISO 9001:2015 certificate for Quality management, Quality solar rooftop integration and commissioning. This certificate is received by our sister concern Kumble Solar Energy Solutions Pvt.Ltd within a time frame of one year from date of incorporation. This is a small reward for our technical expertise, quality materials used, prompt service backup. Kumble solar is sister concern of Solar Trade Links and a Kumble group company.

We thank all our esteemed customer, our bankers, well wishers, friends and relatives for their support and cooperation and expect the same in future also. We shall continue to uphold highest quality standards with transparent business dealings and ethics. 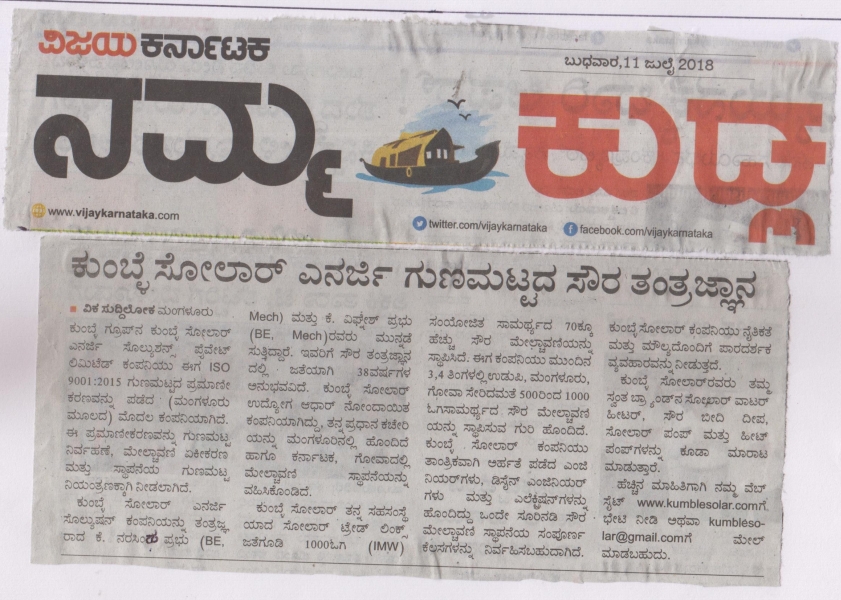 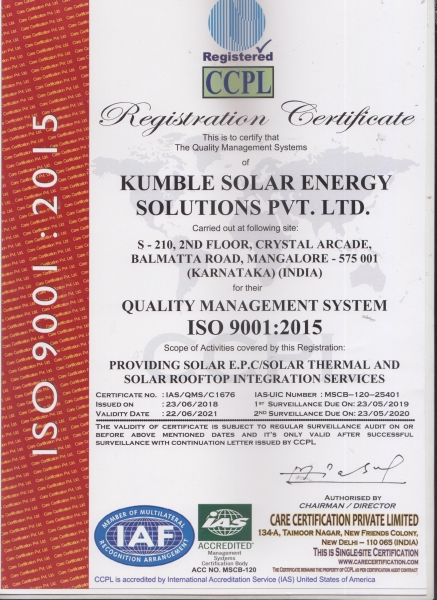 Solar Trade Links has recently participated in the MSME Exhibition held at Town Hall, Mangalore. The event was attended by a large number of citizens. 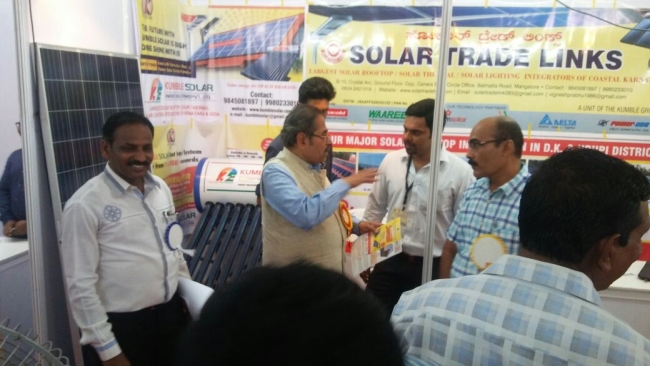 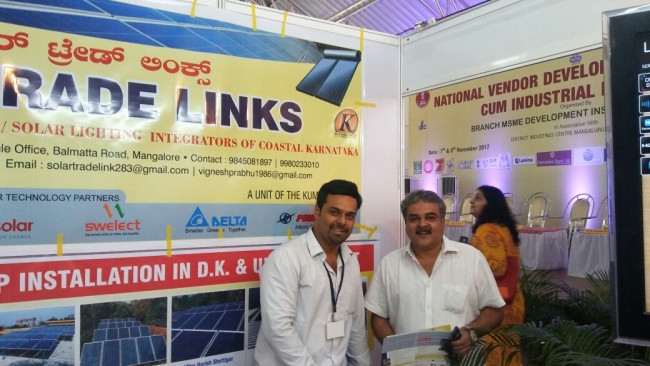 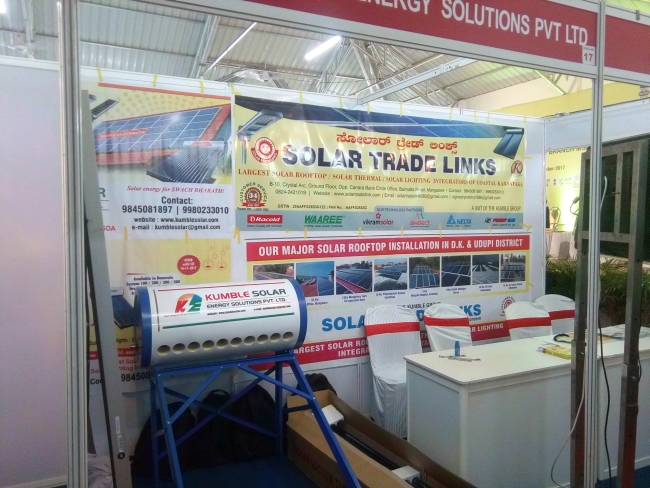 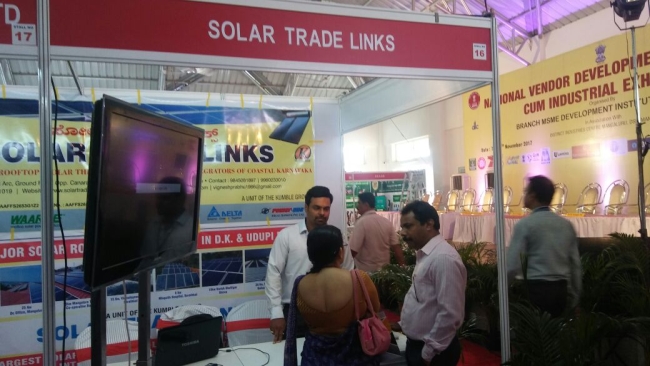 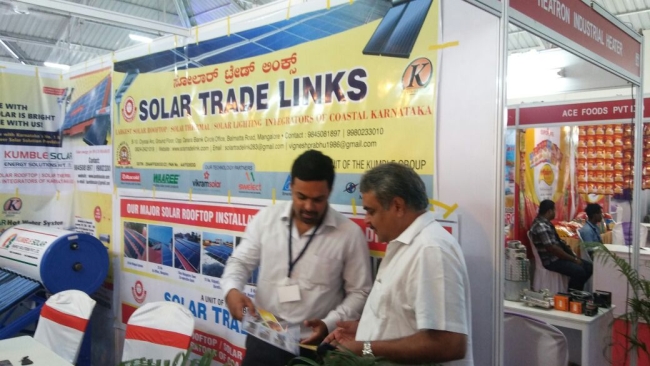 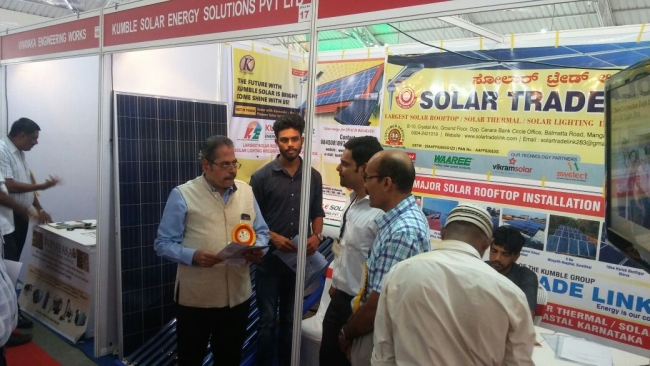 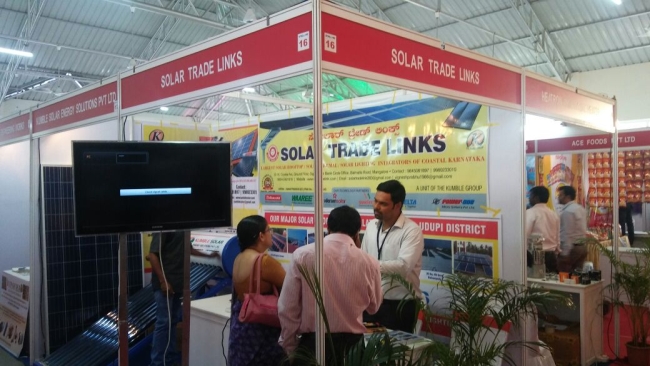 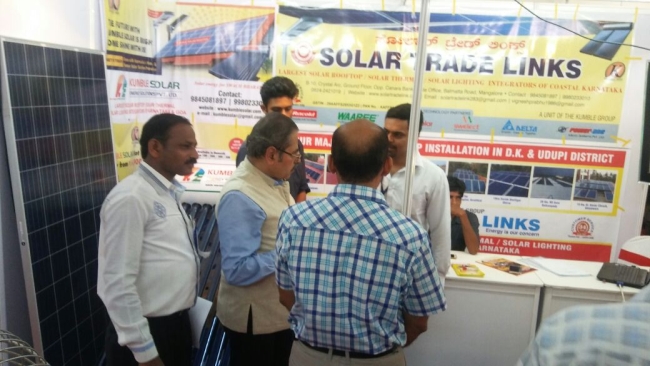 Solar Trade Links Managing Director Kumble Narashimha Prabhu informed that their firm had already installed more than 40 solar rooftop power plants with a combined capacity of 400 kW. Co-operative bank president Nakul Pai said the co-operative bank established in 1918 was one of the oldest. 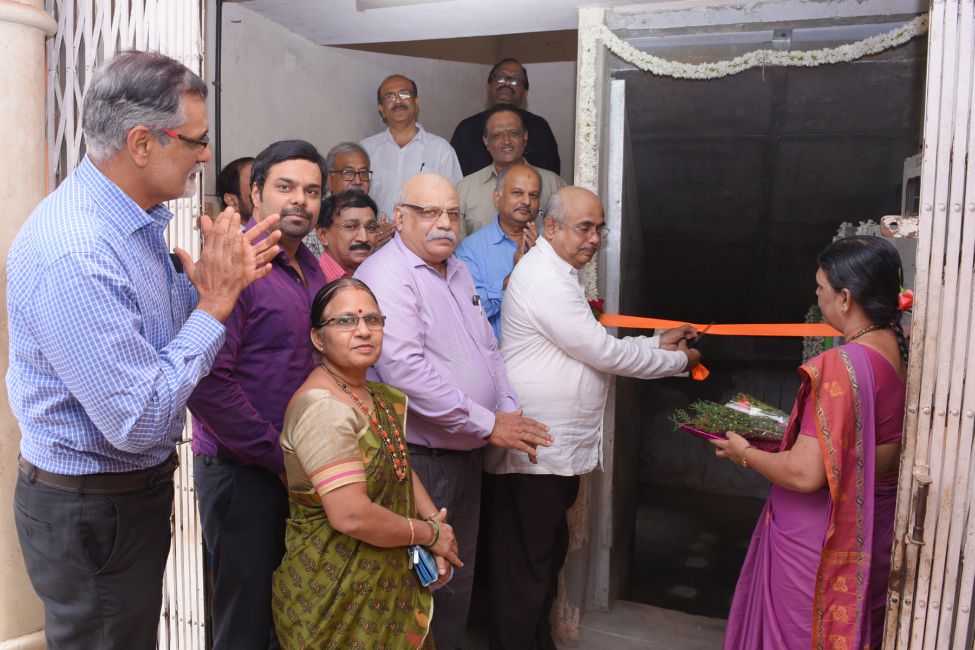 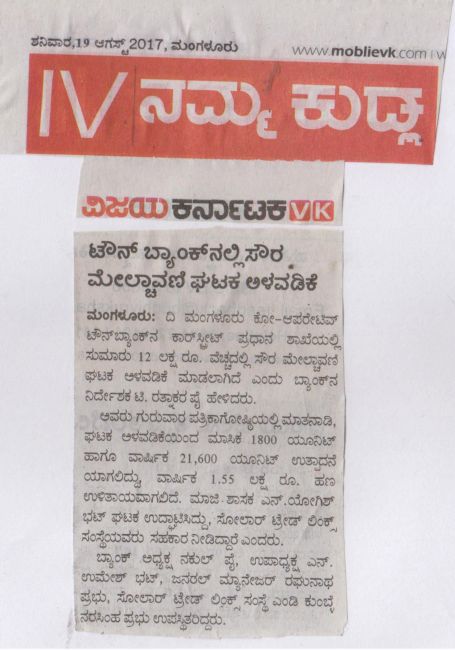 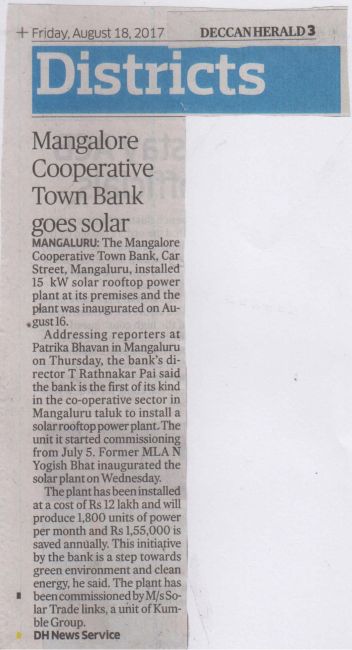 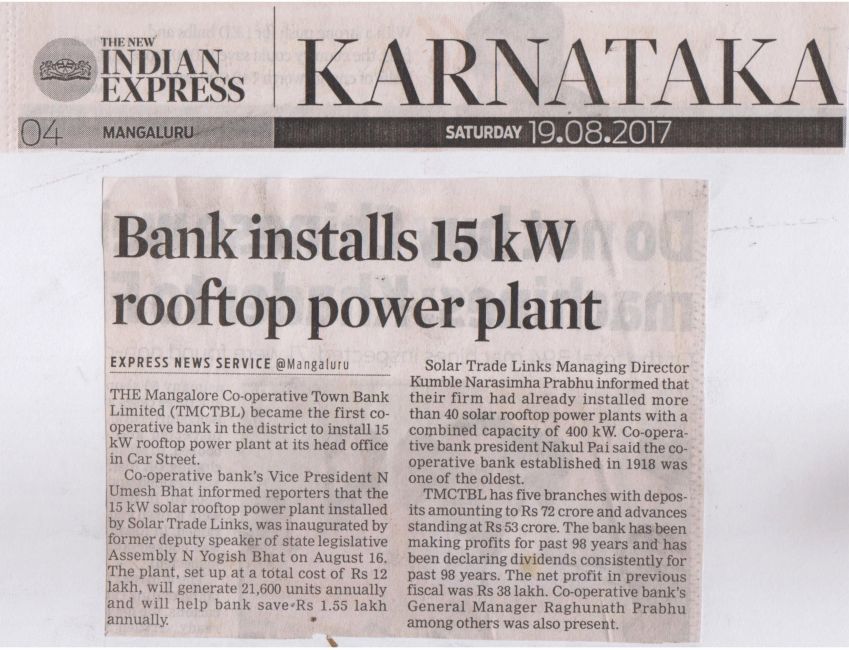 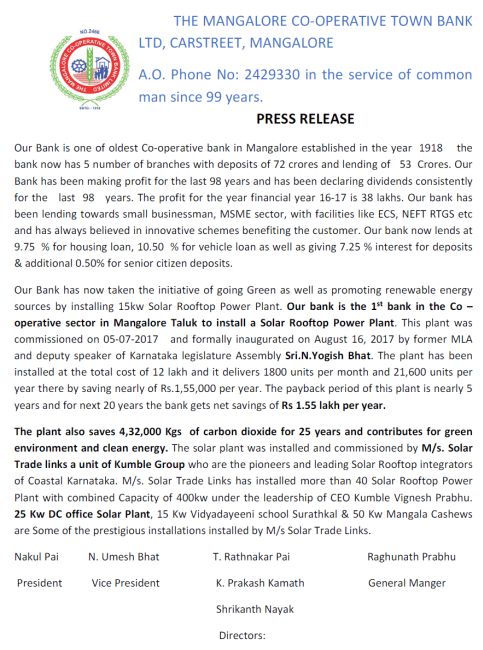 The future with Solar Trade Links is bright, come shine with us

We have been pioneering the use of technology to harness Solar Power to provide effective & efficinet solutions to our customers. Because, customers have realised the importance of Solar efficiency for better future. 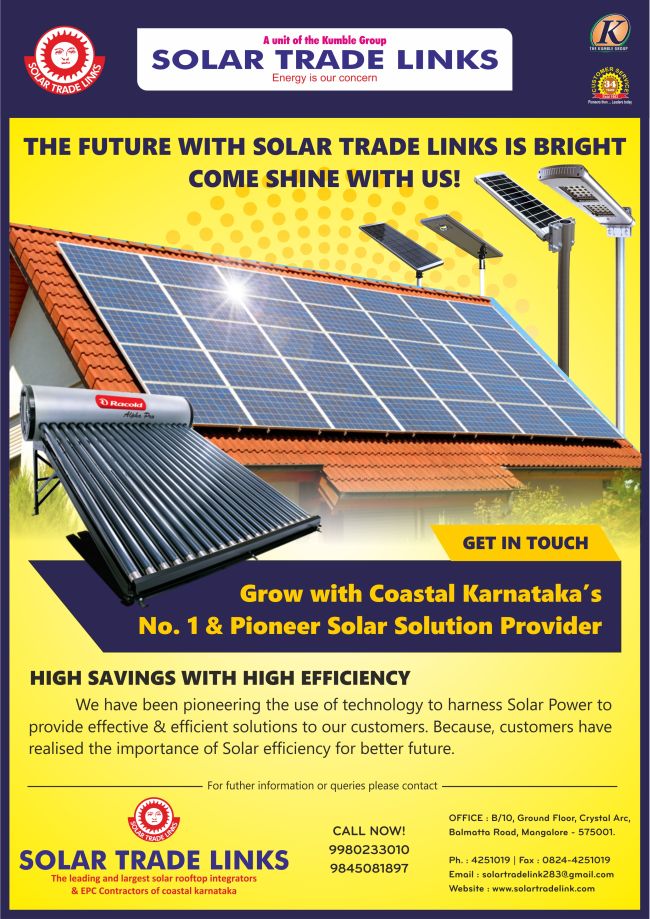 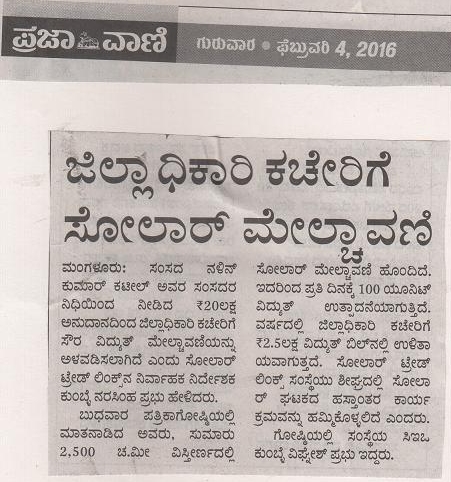 DC's office gets a sunny makeover

The project cost of this soloar plant is approximately Rs. 20 lakhs.

Kumble Vignesh Prabhu, CEO, Solar Trade Links, which installed the systems said: Solar mission 2020, the dream and vision of Prime Minister Narendra Modi, is to promote clean and green energy was taken forward by MP Nalin Kumar Kateel. This is the first of its solar rooftop project in Karnataka for the government office with MPLAD funding from MP Kateel, he said. 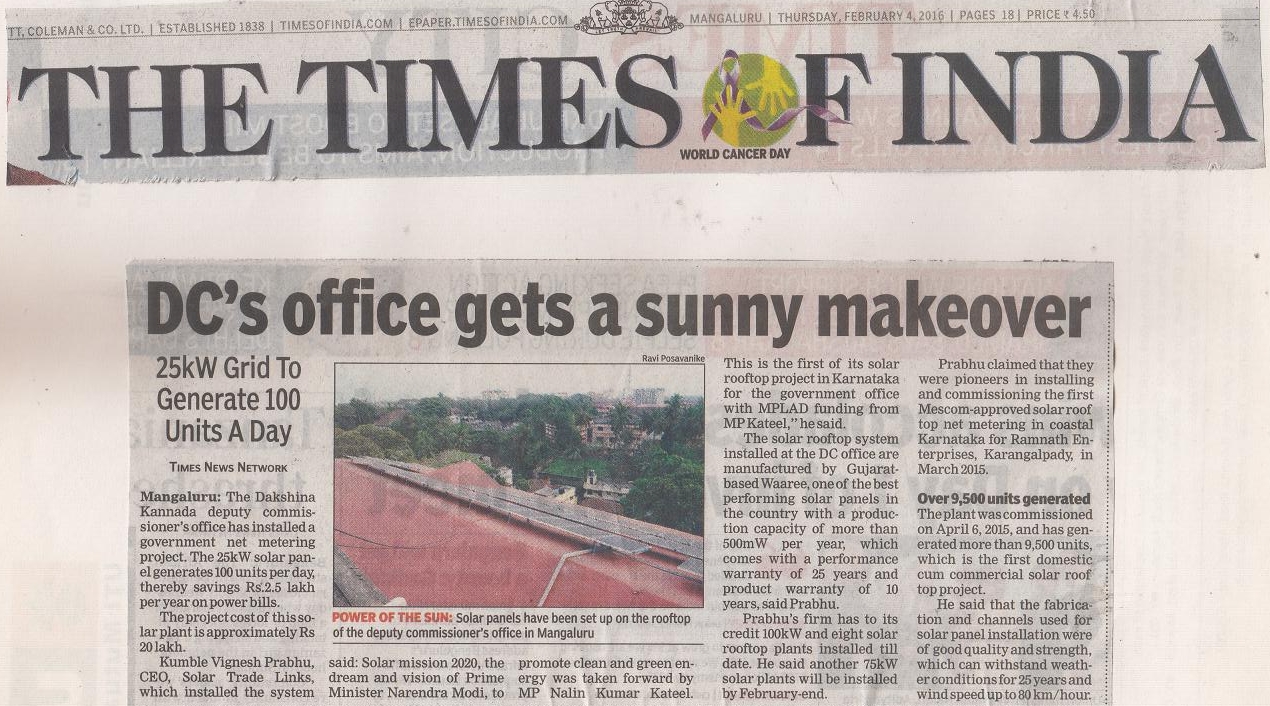 DC's office gets a solar power installed on its roof

The office of the deputy commissioner has the privilege of having the first State Government rooftop solar plant in Coastal Karnataka. 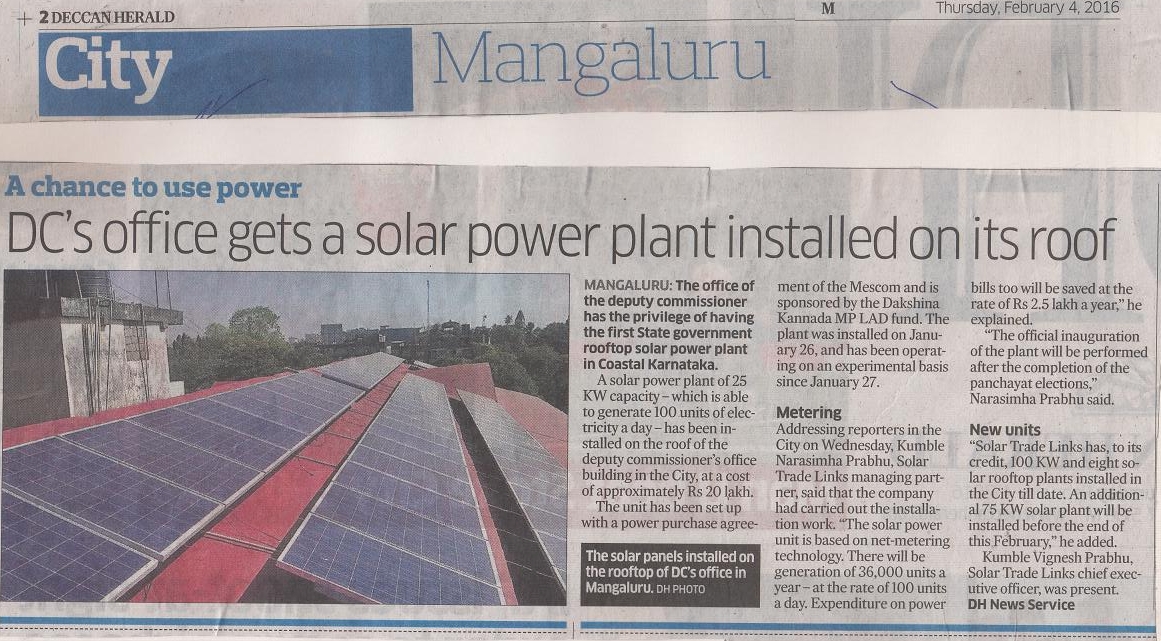 As a first step in this direction, the administration, with funding support from the Member of Parliament (MP) of the district, has intalled roof-top solar power unit at Deputy Commissioner's office complex in Mangaluru. 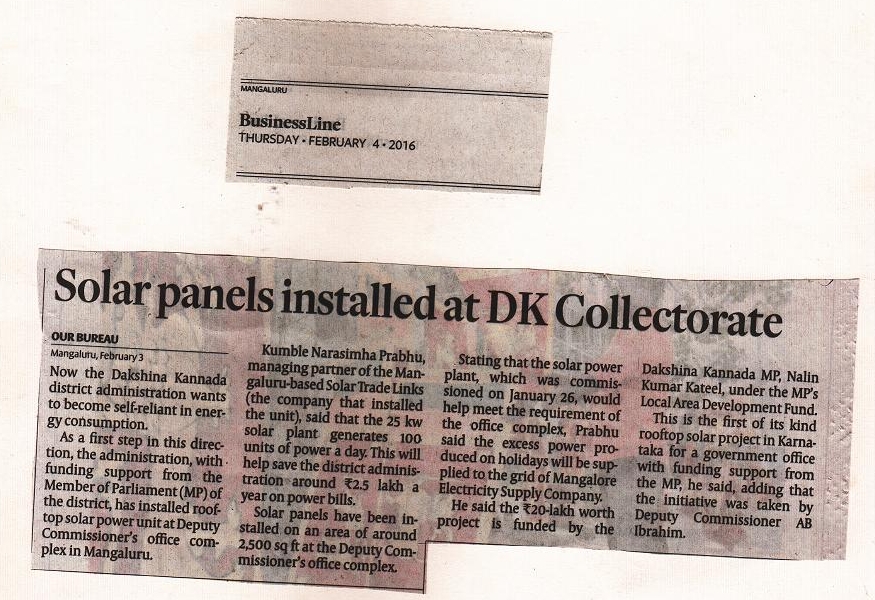 Kumble Narasimha Prabhu, Managing Partner, said his firm had installed and commissioned rooftop solar plants of 10 kw and 12 kw capacity at Ramanath Enterprises at Karangalpady and at Ajith Enterprises at Baikampady Industrial Area in Mangaluru, respectively.

Stating that these are the first two net-metering rooftop solar projects in coastal Karnataka, he said both units save 2,700 units of power a month and ?2.58 lakh a year in electricity bill.

He said these two independent solar power producers have power purchase agreements with Mangalore Electricity Supply Company (Mescom) at ?9.56 a unit for the next 25 years.

These two enterprises now meet their power requirements through solar plants. The excess power is supplied to Mescom, Prabhu said.

Terming it as a small step towards the energy self-sufficiency of the city, he said another four rooftop solar power installations of a combined capacity of 50 kw would be commissioned by October.

He told Business Line that the target is to set up a combined capacity of 100 kw in Mangaluru by the end of December.

Prabhu said that industrial units and hospitals can make use of rooftop solar power plants, as these power plants are also eligible for tax benefits. 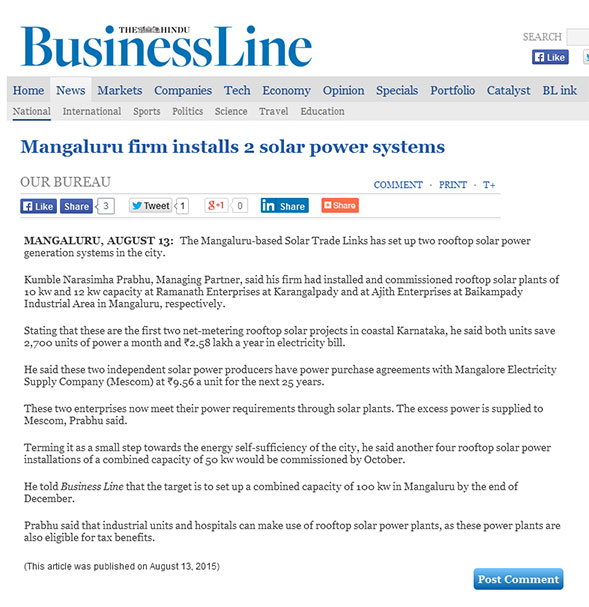 "Solar Trade Links brings an opportunity, which transforms an idea of Energy Efficient Power Solution into hands of common man with a view to sustain environment. It's concepts offer revolutionary innovations and alternate power solutions that are affordable and energy-efficient. Using cutting edge technology, we have mastered the art of replacing unreliable high consumption power sources to an energy efficient architecture and clean renewable sources. We are committed towards working in a way to preserve and protect the nature, caring for it while giving the best suitable solution to our customers. There is always a way to tend to both the customer and nature, and we strive to achieve that goal" - Kumble Vignesh Prabhu-CEO/Kumble Narasimha Prabhu-MD, Solar Trade Links

Coastal Karnataka has now its own independent power producers of Solar Rooftop Power plant with the MESCOM power purchase agreement for the next 25 years at Rs 9.56/unit; Prasanna with 10 kW plant and Ajith Kamath of Ajith Enterprises with 12kW plant are the first 2 MESCOM Net Metering projects supplied and installed by young next gen Technocrat Kumble Vignesh Prabhu, CEO-Solar Trade Links (STL), Mangaluru. These two companies are now meeting their full/partial power requirement through solar plant and the excess is exported to MESCOM. The detailed information regarding Solar Rooftop Power Plant was briefed during the press meet held at Mangalore Press Club by Kumble Narasimha Prabhu and Kumble Vignesh Prabhu- MD and CEO respectively of STL, along with Pavan Hegde-Manager- Business Development at STL. 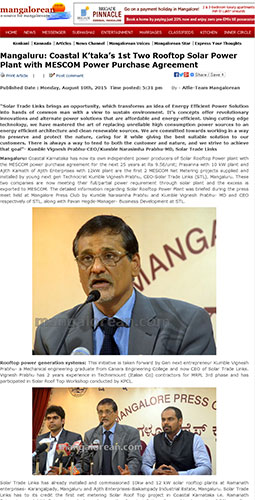 Coastal Karnataka is all set to tap its unconventional solar energy, with MESCOM signing a Power Purchase Agreement (PPA) with Solar Trade Links for buying power at Rs.9.56 per unit for the next 25 years.

Solar Trade Links to its credit has already installed and commissioned 10kw and 12kw solar rooftop plants at Ramanath Enterprises and Ajith Enterprises at Karangalpady and Baikampady respectively.

These two firms besides meeting their power power requirement are exporting additional power to MESCOM grid.

Solar Trade Links is planning another four installation of a combined capacity of 50kw and the rooftop solar power is likely to be commissioned before October 2015. Both projects now save 2700 units per month and Rs. 2.58 lakh savigns per year.

While two customers have already signed up for net metering power purchase agreement with Mescom, a green energy promoter in the city is gearing up to bring more than 300 customers under the new government scheme.

More than 20 customers have applied through Solar Trade Links (STL), which is instrumental in installing coastal Karnataka's first two rooftop solar power plant under Mescom power purchase agreement on net metering. STL managing partner Kumble Narasimha Prabhu told STOI that the company has set a goal of bringing more than 300 customers under the solar power scheme that enables them to sell excess power back to Mescom.

"Our company has to its credit the first net metering solar roof top project in coastal Karnataka. We have installed and comm issioned 10kw and 12 kW solar rooftop plants at Ramanath Enterprises at Karangalpady in the city and Ajith Enterprises in Baikampady industrial estate. They have been meeting their power requirement through solar plant and excess is exported to Mescom," he said. 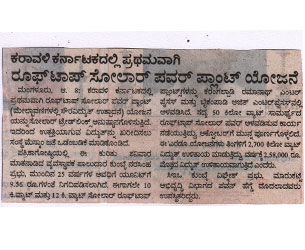 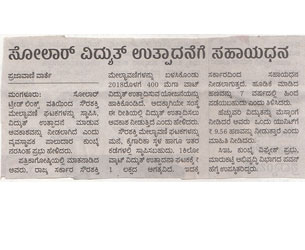 He does not pay power bill, MESCOM pays him

Prasanna K R, a business man from Mangaluru, does not pay his monthly MESCOM bill. Instead MESCOM pays him for electricity generated in his house. 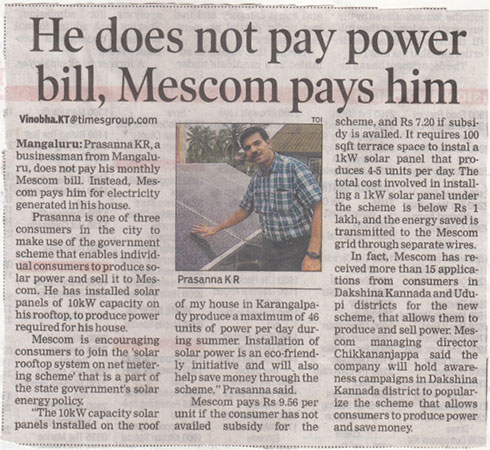 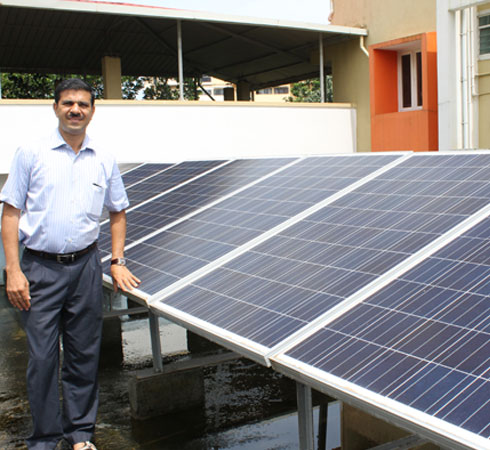 Acts and rules alone cannot contribute to environment protection. The rules must be effectively implemented while also sensitizing the public on the issue, said State Forest Minister B Ramanatha Rai. He was speaking at the World Environment Day Programmes and Environment Award presentation ceremony held at the Gorakshanath Auditorium near the Kadri Park on June 27, Saturday under the aegis of DK District Administration and Karnataka State Pollution Control Board.

Vijay Kumar, Secretary of the Karnataka State Pollution Control Board, KV Rao, Chief of Pilikula Science Centre, Nigam B Vasani, President of Kanara Chamber of Commerce and others were present. Prizes were awarded to winners of various contests. 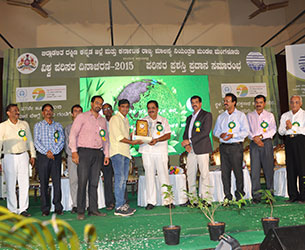 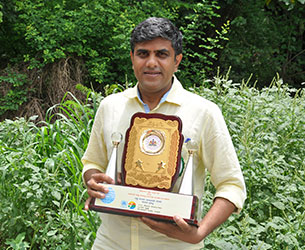 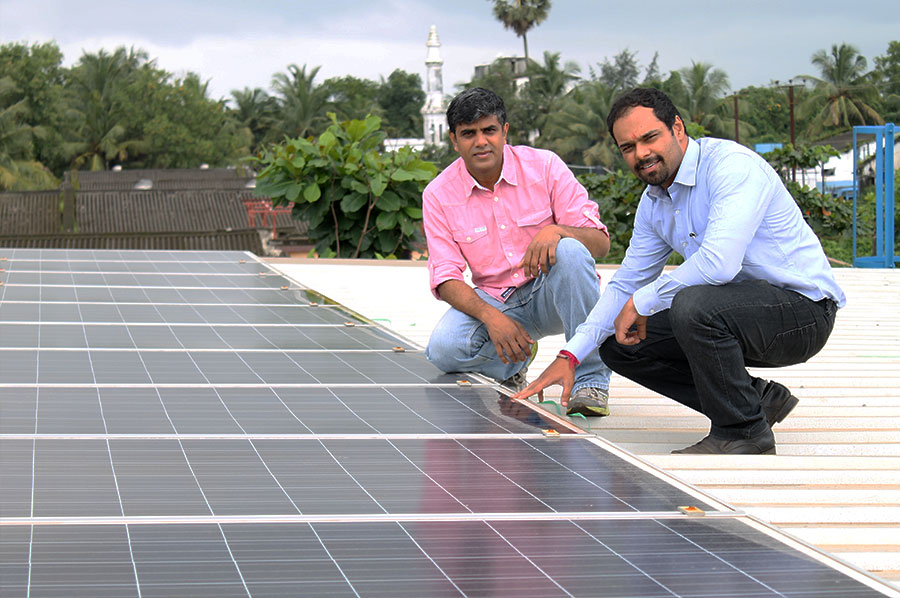